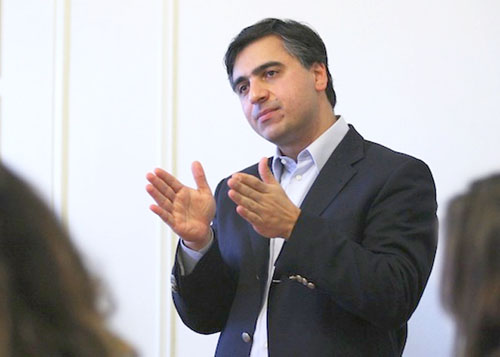 Its Implications, and Other Related Matters

For the past decade, I have maintained that a lasting peace in the middle-east can only come about with the democratic transformation ofIran.  This view is shared by many in the Iranian human rights movement.  But today, it contends with the looming threat of war, foreshadowing a catastrophe that could set back the region for many years.  In this light, how can we best understand the context within whichCanadamust craft a just and effective foreign policy towardsIran?

Prior to the rise ofIran’s “Green Movement” in 2009, pundits and analysts ridiculed us for suggesting that an emerging civil society would profoundly re-shape the middle-east.  While we labored to educate students in Ghandian philosophy, or to train them in non-violent resistance at secret workshops, those in the corridors of power considered only two options: war or appeasement.  When millions of Iranians poured into the streets calling for democracy, the post-9/11 image of a “clash of civilizations” with Islamic fanatics and suicide-bombers was confronted with a radically different reality.  While President Ahmadinejad distracted the world with his Holocaust denial and hate-mongering, the Iranian people exposed the other veiled face of their country: a youthful, idealistic, and inspiring generation, engaged in a heroic struggle to reclaim its lost humanity.  It was this unprecedented “Twitter Revolution” that became the prototype of the Arab Spring two years later.  The difference was that after thirty years of suffering totalitarianism masquerading as religion, Iranians had arrived at a post-ideological, post-utopian ethos, with human rights as their unifying theme.  Despite brutal repression, this movement represented a seismic shift that seriously undermined the legitimacy and future prospects of the Islamic Republic.

With the exclusion of Islamic reformists, the prospect of gradual change within the existing system has become increasingly remote.  Iranhas become a mercantile-militaristic state – as much a kleptocracy as a theocracy – intensifying the concentration of wealth and power in the hands of the regime’s enforcers: the IRGC Revolutionary Guards.  This radicalization is reflected in the dramatic increase of show trials and hate propaganda, widespread imprisonment and torture of dissidents, and an alarming rate of executions.  According to the Iran Human Rights Documentation Centre, there were at least 59 executions in January of this year alone. The picture that emerges is that of a regime terrorizing its citizens for want of power; a regime that is weak and fighting for its survival.

Given this duality, we argued that the international community must pursue policies that empower the democratic movement while isolating the regime and its principal instruments such as the IRGC.  We argued that human rights rather than the nuclear issue should be the focus of foreign policy.  We lobbied for years to subject those responsible for crimes against humanity to travel bans and asset freezes: a policy finally adopted by theUSand EU after the atrocities of 2009.  As a first step in bringing such leaders to justice, we established the Iran Human Rights Documentation Centre in 2004 as part of a campaign of “naming and shaming”.  Our Report on the post-election violence in 2009 – prepared with support from the Government of Canada – became a basis for blacklisting individuals by theUSand EU.

In this context, you can only imagine our astonishment to discover in September of last year that Mahmoud Reza Khavari, the head of the Iranian National Bank – the financial lynchpin of the IRGC, Hamas, and Hezbollah, not to mentionIran’s ballistic missile and nuclear program – was granted Canadian citizenship in 2005 and thereafter lived an opulentTorontomansion!  For too long, we inCanadaturned a blind eye as the Islamic Republic’s insiders made our country into a haven for their ill-gotten fortunes and spread their networks and influence to silence dissidents abroad.  In that light, to the extent that economic sanctions isolate the regime, they may be a positive development.  But this is not without qualifications.  First, the sanctions are linked to the nuclear issue rather than exacting a cost for human rights abuses.  Second, we must not remain oblivious to its effects on ordinary Iranians.  When, for instance, students at my university cannot pay their tuition fees because of a complete freeze on banking transactions we have to consider whether certain adjustments are required on humanitarian grounds.  So we must bear in mind that the purpose of sanctions should be to isolate the regime, not to punish the Iranian people, and that we must incentivize respect for human rights rather than focusing exclusively on strategic threats, not least because the two are closely related, as I shall explain.

In addition to sanctions, we should also consider whether our practices in other areas such as immigration policy are consistent with our condemnation ofIran’s human rights record.  For instance, while we are using diplomatic channels to prevent the execution of two Iranian-Canadians – Hamid Ghassemi-Shall and Saeed Malekpour – who have been sentenced to death on spurious charges, our immigration officials are in the process of deporting Kavoos Soofi – an Iranian dissident in Toronto – despite Amnesty International’s view that he faces a substantial risk of torture or execution.  If we truly believe thatIranis abusing its citizens, then we should be increasing our intake of refugees rather than deporting the likes of Mr. Soofi.

I turn now to the most pressing issue; namely, the nuclear question and the threat of war.  Like the vast majority of Iranian-Canadians, I am against a military confrontation, because of its impact on innocent civilians, and its unpredictable consequences on sectarian violence in the region.  Consider for instance the 2006 study in the reputable Lancet Survey medical journal, putting the number of excess civilian deaths in theIraq war at 650,000.  But beyond humanitarian considerations, allow me to explain why war is such a bad idea by looking at the current situation through the logic of the Islamic Republic’s leadership.  First, the “Green Movement” has dealt a serious blow to its legitimacy and remains a threat.  Second, the power struggle between the Supreme Leader Ayatollah Khamenei and President Ahmadinejad is reaching a point of crisis.  Third, its sole regional ally – the murderous Assad regime inSyria – is facing collapse, and with it the capacity to send weapons to Hezbollah inLebanon.  Fourth, Hamas has been lured out ofIran’s orbit byTurkey andQatar.  And fifth, economic sanctions are taking a heavy toll on the regime’s finances.  Under such dire circumstances, what is the only thing that can save the leadership?  The answer is war withIsrael andAmerica!  It is the one thing that can rally the masses behind the leadership, and under the cover of war, provide an opportunity for mass-execution of thousands of opponents, similar to the atrocities justified in the 1980s by pretext of the Iran-Iraq war.  At best, a military attack will delay the acquisition of nuclear capability by two years, whereas the democratic movement would be set back by at least a decade.  It cannot be disregarded that the problem is the nature of the regime rather than nuclear capability.  Consider for instance, how in the 1980s, the newly established democracies inArgentina andBrazil dismantled the nuclear programs pursued by prior military regimes.  In this context, talk of war is exactly the distraction that the regime needs to bolster itself at a time of weakness and vulnerability.

It is useful to recall the situation after the September 11th terrorist attacks, when the reformist Khatami government played a crucial role in helping the Americans defeat the Taliban.  This cooperation was rewarded with threats of a military invasion ofIran, following the overthrow of Saddam Hussein.  Not surprisingly, it was the hardliners that benefited most from these hawkish policies.  Ironically, it was Saddam’s overthrow that helped transformIsrael andIran from unwitting strategic allies against a common enemy to regional rivals.  During the Iran-Iraq war in the 1980s, while Ayatollah Khomeini called for Israel to be “wiped off the map”, the Islamic Republic was enthusiastically receiving Israeli weapons shipments, just as the United States and the Europeans were arming Saddam Hussein, while he bombed Iranian cities and gassed his Kurdish population.  These are the cynical power politics that have brought us to the unfortunate reality we face today.  There is no doubt that nuclear proliferation would destabilize the balance of power in the middle-east and lead to an arms race.  But by buying into the Islamic Republic’s inflammatory apocalyptic rhetoric with alarmist rhetoric of our own – namely, the suggestion thatIran intends to use nuclear weapons in a suicidal attack againstIsrael – we are giving the regime the enemy that it needs to survive.  By invoking Armageddon, we are throwing the hardliners a life-line just as they are finally drowning in the morass of treachery that is of their own making.

It cannot go unnoticed that even the likes of ex-Mossad director Meir Dagan and former Israeli Defence Forces chief-of-staff Gabi Ashkenazi have serious misgivings about the wisdom of war.  In the words of Yossi Alpher – Defence Minister Barak’s former Senior Adviser – there is an “obvious disagreement” onIranbetween hawkish elements and “a more cautious and less alarmist camp that comprises much of the professional security community”.  Now is a time then that our leaders should avoid the politics of fear, lest it lead to a self-fulfilling prophecy with catastrophic consequences.

In conclusion, Madam Chair, you may recall that we first met inKiev, in September 1990, at the first UN human rights workshop in what was then theSoviet Union.  We could have scarcely imagined what was to transpire in the coming months and how it would irreversibly change the world.  Beyond attempting to grapple with the current crisis, Canadians should also look with hope and imagination into the shared destiny that awaits the peoples of the middle-east.  I remember from my childhood that Iranian and Israeli tourists could take direct flights betweenTehranand Tel Aviv to visit each others’ countries.  Surely that too is a possible scenario for the future of the region.  As Rumi wrote almost a thousand years ago, war is “unnecessary foolishness” because just beyond “there is a long table of companionship.”